I guess it's time for another update, as it's been too long!

I have been very busy recording the album over the past few months, and I'm now at the point where the bulk of the recording is done. There is a bit of tweaking which still needs to be done and I will be putting some drums and percussion on there too, but other than that, it's all there. Then, of course, will come the mixing stage, which is a whole other thing; I intend to spend plenty of time getting it right. Getting a mix right is not easy by any means, and I have often failed at that in the past. This time, I am determined to put that behind me. I have been getting some excellent recordings which, I feel, is half the battle. It's hard to say precisely when the album will be finished, but as an independent musician, I am, for better or worse, able to work solely by own watch. As such, it will be ready when it's ready. 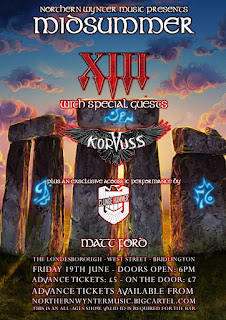 I have also recently been preparing for my first gig in almost two years, and my first ever solo gig. It's taking place in Bridlington, and as I write this, I have one more sleep with which to prepare myself. This will be a pretty big deal for me, and once the gig is done, I intend to secure more gigs for the coming months. This one will be fairly stripped back - essentially just me and a guitar (and a hell of a lot of delay and reverb) - but I want to introduce further sonic and, perhaps, visual elements to my live show in the future. I want to envelope and captivate my audience. I have always striven to do that, and perhaps, working under my own name, and on my own terms, it will be easier to achieve that now. And yet, there is only so much one person can do on stage. Anyway, more on this soon enough. For the time being, I am looking forward to this gig immensely!

Then it will be back to working on the album. I will also be recording a song which will not be included on the record...but I won't say any more on that yet. There is a photoshoot on the way too, and various other projects on the horizon. So all in all, the future looks...busy. And that's exactly how I want it.

Stay tuned for more updates soon, including album info...when I decide to impart it.